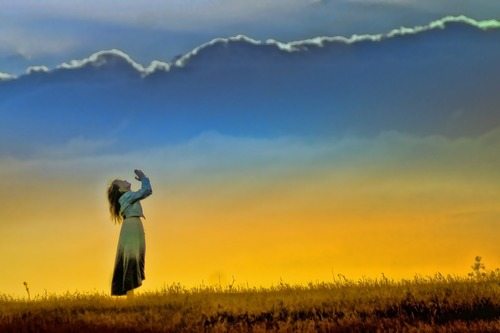 Have you ever been “beyond all hope”?

It can feel so bad, so low, so dark.  It’s the place of giving up, of surrender.  We use the phrase “beyond all hope” when we believe failure is a one-hundred percent certainty.

But what’s beyond hope on the other side?  The opposite, of course.  It is when we believe that success is a one-hundred percent certainty.  It is complete trust.  Total faith.

When we are lurking around the bottom end, we are feeling worry.  There is a little glimmer of hope that things might work out and we are not totally resigned to hopelessness, but we’re mostly focused on the worst case scenario.

Once we head past the midpoint, we feel hope.  And we value hope so much, because feeling hope-less feels so terrible.

But isn’t hope just the sunnier twin of worry?

Sure, it feels good because it is on the optimistic end of the spectrum. But there is still some percentage of doubt within it.  When we are feeling hope, we are still clutching and grasping.  Just like being in the “grips” of worry, we think of ourselves as “holding on” to hope.

Hope can feel like a lighthouse when you are lost in a stormy dark sea.  But once you’ve hit land, why not go that extra mile and shift yourself away from hope and into belief?  Try this.

Step 1: Choose something you are currently “hoping” will turn out the way you desire.

Step 2: Create a belief statement that you can use when you feel yourself slipping into hope (or worry).

As soon as you start wanting to control how it will happen and thinking about what you “should” be doing to make it happen, you’ll know you are slipping back into hope and away from belief.  That is when you use your belief statement to remind yourself to let go.

When you believe, you don’t have to work out the details or figure out what to do next.  The steps to take will be obvious.  The how won’t be limited to your imagination.

Hope is like a flashlight.  When you are making your way through a dark cave, you need it.  But once you are back in the sunlight, you don’t leave it on and carry it around.  You KNOW the sun will continue to shine.  As long as it is daytime, you believe that beyond a shadow of a doubt.  So instead of worrying about what comes next, you can bask in the sunshine and enjoy the view.

Where in your life is it time to put your hope away and believe in the light?