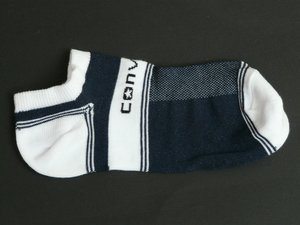 I keep washing the same athletic sock over and over.  I’m not even sure where it came from.  It was probably left behind by some little friend, because it doesn’t belong to anyone in our house.  It’s been a couple of months, so I think it’s safe to say it doesn’t have a mate.  But instead of tossing it in the trash or finding a home for it, I keep putting off the decision and washing it.  I dry it, too.  Once all the clothes get folded and taken away, it is always left there all alone.  So, I just toss it back into the nearest laundry basket.  Crazy, huh?

It’s really no less crazy when we do this other times in our lives.  We keep doing the same thing over and over and expect to have a different result.  But, guess what?  The problem or issue keeps knocking at our door.  Here I am again.  And we respond the same way I do with the sock, “Well maybe you’ll disappear THIS time.”

I may be a little crazy with the sock, but it’s pretty insignificant.  However, I do it other times where it has more of an effect on my life.  Sometimes I stay up too late night after night and get more tired even though I know I want to feel refreshed in the morning.  Or I let month after month go by without calling people I love even though I want to feel close and connected to them.  But why would I expect to consistently stay up and wake up feeling well-rested?  Or not reach out to loved ones and expect to have a super close relationship? That’s like expecting the sock to go away on its own.

I’m not the only one.  People do this all the time.

You would think it is time to make a new choice.

So what gets in the way?  What keeps us from taking a different course of action?

What if I throw the sock away and the mate turns up the next day?  Well, who cares?  I already know what happens if I keep washing the sock.  I think it’s fair to conclude that I know where that leads.  How about a new choice?

I bet you are able to easily think of an area where it’s time for a new choice.  You already know what happens if you keep making the one you’re making.  Let’s get off the crazy train.  I’ll go throw away that sock.