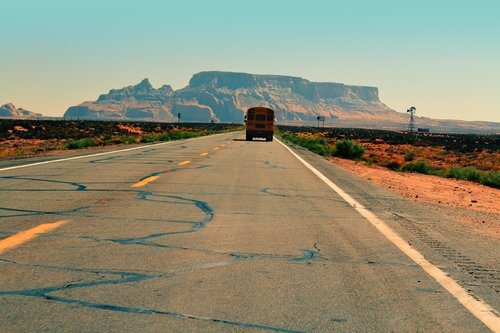 Have you ever missed the bus?

I missed not one, but TWO this week.

Not the theoretical bus.  I’m talking about the good old fashioned yellow ones.

Unlike theoretically missing a bus where it’s game over, missing a bus isn’t actually the end of the line for us.  Because I drive my oldest son to the bus stop every morning, missing a bus means the chase begins.  The chase is safely driving as fast as you can to the next stop while simultaneously delivering an explicative-laced lecture and completely destroying the loving off-to-school goodbye.

It was awful.  I felt terrible afterwards.

The second day was marginally better.  It wasn’t quite the fairy tale send off at the next stop, but I wasn’t devastated.  I was still able to go on with my day even though my son never responded to my apologetic text.

With the help of a few adjustments to our out-the-door routine, we made it to the bus stop on time on the third morning.  And I felt great!  I drove away with that warm fuzzy feeling you get when you accomplish something AND do it while maintaining your good mood.

And though it was a victorious feeling, not a moment later I remembered a lesson I’ve learned many times.

Self-mastery is less about accomplishment and more about how we show up when we are not victorious.  Damn.

It’s not about catching the bus.  It’s about how I handle missing it.

And that led me to my next question.

What exactly IS success in this situation?

Is it simply arriving to the bus stop on time?  Although that is a very outcome-based, measurable version of success and one that my logical linear mind gravitates toward, is that really my goal here?

I can think of far too many very ugly mornings where we did technically arrive at the bus stop on time.  But, I can’t tell you that everybody’s spirits were intact.

And to me, that matters.  We’ve got a beautiful and brilliant day ahead of us.  How “successful” is that day really going to be if we are all launched into it feeling broken from the process of getting there?

Success isn’t just about the technical details of refining wake up times and assessing task lists for how reasonable they are in the time frame.

Success is also about strategies for…

I’m not going to ditch the strategy of asking my kids, “How can we make adjustments to improve this situation?”  and “What do you think went wrong there?”  Those are still great ways to involve them in the process of making sure we get to the bus stop next time.

But IF we miss another bus, I’m going to shrug and make a joke and redefine the chase.