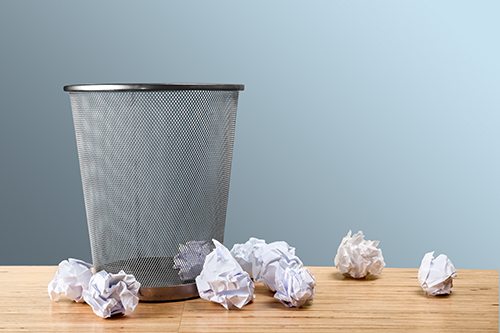 The trash can has been under my kitchen sink on the right side for the last thirteen years. So obviously, I am on autopilot when I throw something away. Open right side cabinet, toss trash in.

However, my husband just installed a new sink which forced us to relocate the trash to the left side. Muscle memory can be a strong thing, though, especially when it is accessed frequently. So every time I go to throw something away, I open the right cabinet. Oh yeah, no trash can. Each time it happens I think, “How long is it going to take me to retrain myself?”

For years, my mind has known the trash was under the right sink and my muscles responded according to that reality. Now that it has been moved, I have a new reality which I intellectually know. My actions just haven’t adapted yet. But they will.

And what choice do I have? It doesn’t make sense to continue to open the right cabinet, see the missing trash can and scream and curse about it. The trash can isn’t there. That is the reality. It’s so simple. Accept and adapt.

But in our relationships, where it really matters, we sometimes behave so oddly.

People are who they are. They act and behave in certain ways at any given moment. This is the reality.

Sometimes we don’t like the reality though. It might be in conflict with our beliefs about how people are supposed to act, or maybe it doesn’t line up with how we want this specific person to behave. So instead of accepting the reality of who they are, we get angry, resentful, frustrated, hurt, etc… We fight against the other person’s natural state of being, because we want it a different way. That doesn’t make any more sense than me screaming and cursing at the trash can. “WHY AREN’T YOU ON THE RIGHT SIDE ANYMORE?! HOW CAN YOU DO THIS TO ME?!!”

Sometimes we flat out refuse to change our behavior or adapt to the people in our lives. And then we get more and more upset with them for not doing what we want, never recognizing that we are holding them accountable for something they may not be capable of, or may not even want to change or do.

That would be like me continuing to throw the trash into the right side, and when I’ve got a disgusting pile of garbage, blaming the trash can for not being where I want it to be. Crazy, huh?

Considering that we have total control over our own actions, it seems kind of ridiculous to resist what is, and cause ourselves a bunch of disappointment. I vote instead for accepting and adapting. And less fighting against reality. Just like with the trash can, there is the intellectual acceptance (“Oh yeah, that’s who they are right now.”) and then the time it takes for our actions to catch up. But as long as we are willing to accept the situation, the adaptation will come.